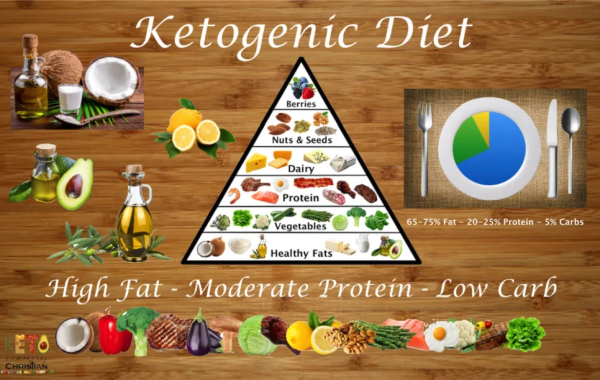 The Keto Diet (ketogenic diet) is a low-carb, high-fat diet. As a diet plan, it shares many of the same foods and drinks as the Atkins diet and other low-carb diets such as Lazy Keto.

What makes a Keto diet different is that it focuses on drastically reducing carbohydrate intake and replacing those carbohydrates with fat. This drastic reduction in carbohydrates puts your body into a metabolic state that is called ketosis.

The point of going into ketosis is to help your body become efficient at burning fat for energy. While this is happening, your body turns the fat into ketones in the liver, supplying energy to the brain. A cautionary note: ketogenic diets can cause massive reductions in blood sugar and insulin levels.  While this can be a good thing for some people, it can cause problems for other people.

There are a number of reasons why people go on a ketogenic diet. In most cases, it is to lose weight. In some cases, they are medically supervised and use the ketogenic diet as part of a treatment plan.

The ketogenic diet is more than just a low-carb/high-fat diet to lose weight. It is being studied and used now as a part of the treatment of many different diseases.

However if the Keto diet seems to intimidating, especially at first, many start off with Lazy Keto.  In a nutshell, Lazy Keto there are no set rules.  You only casually keep track of your macros by reading food labels or just eat low carb foods in general. There are no set rules regarding your calories, fat or protein intake.  You do try to keep your carbs under 50 g. net carbs per day.  Lazy Keto is great for those starting out as it removes the stress of keeping track of everything and once you get used to it you may progress to a stricter Keto Diet.  We will dive into Lazy Keto in future blog posts.

On a personal note, my brother was able to lose weight and get his Type 2 Diabetes under control using a low-carb diet and he has  maintained this lifestyle for over 10 years.  I, myself, have lost 35 lbs following a modified Keto diet, more low carb than high fat have been able to maintain the weight for over two years following the Lazy Keto diet.

No matter which version of Keto you use, I am confident you will have success! And it is the goal of Low Carb & Keto Meals to give you plenty of options to stay on track!

Visit our Other Websites